Yet another COVID model.

I did this modelling because I was asked to provide some COVID estimates for a hospital. There have been lots of models in the last few weeks and I don’t want to reduce the signal-to-noise ratio in this vitally important area, but I’m sharing this in case someone finds my approach useful. All the code is here. I have used similar models before to simulate disease numbers over time, for example my PhD student Dimity used microsimulation to examine the long-term effects of climate change (Stephen and Barnett 2017).

There is a huge caveat to this modelling which is a dramatic simplification of reality, and none of the estimates should be taken as fact. Neither should any of the confidence intervals be taken as a solid estimate of the best or worst case.

We create models like these to help us understand what might soon happen and how interventions might help. Doing this modelling has also had the added benefit of giving me a better understanding of the modelling issues.

All my models are based on the excellent ordinary differential equation models by Alison Hill. My models are a microsimulation version of those models, and I have validated my code by comparing my results to Alison’s. I also make heavy use of the MicSim package for running microsimulations in R written by Sabine Zinn.

I think of ordinary differential equations like a series of inter-connected bath tubs, with the equations controlling the force of the tap and the size of the plug-holes. The level of the water in each bathtub over time is what we are interested in. In this model we start by pouring all the water into the “Susceptible” bath at the top of the chain.

A microsimulation is similar, but we can think of it using ice-cubes instead of water, with each individual being an ice-cube. The more ice-cubes we have, the more the microsimulation will behave like water. But when numbers are low, there’s a greater chance of small number of stochastic events (bumping ice-cubes) influencing the trajectory of the flow. Microsimulations are also called agent-based models.

The diagram below shows the states (bath tubs) for the COVID-19 model and how they connect.

And here are the labels for the seven states:

It’s also easy to extend microsimulations to account for individual characteristics. For example, we could increase the risk of infection-related death by age. We can also easily create groups of people, such as families or health-workers, and then modify their risk over time.

Estimates of COVID infections over time

This work builds heavily on Alison Hill’s model, and I recommend looking at that first. The table below shows the key model assumptions:

The plots below show 50 versions of the daily cumulative number of infections, recovered and dead. Because microsimulations are stochastic, we get a different answer when we re-run the same simulation. So the plots show the stochastic uncertainty in numbers. 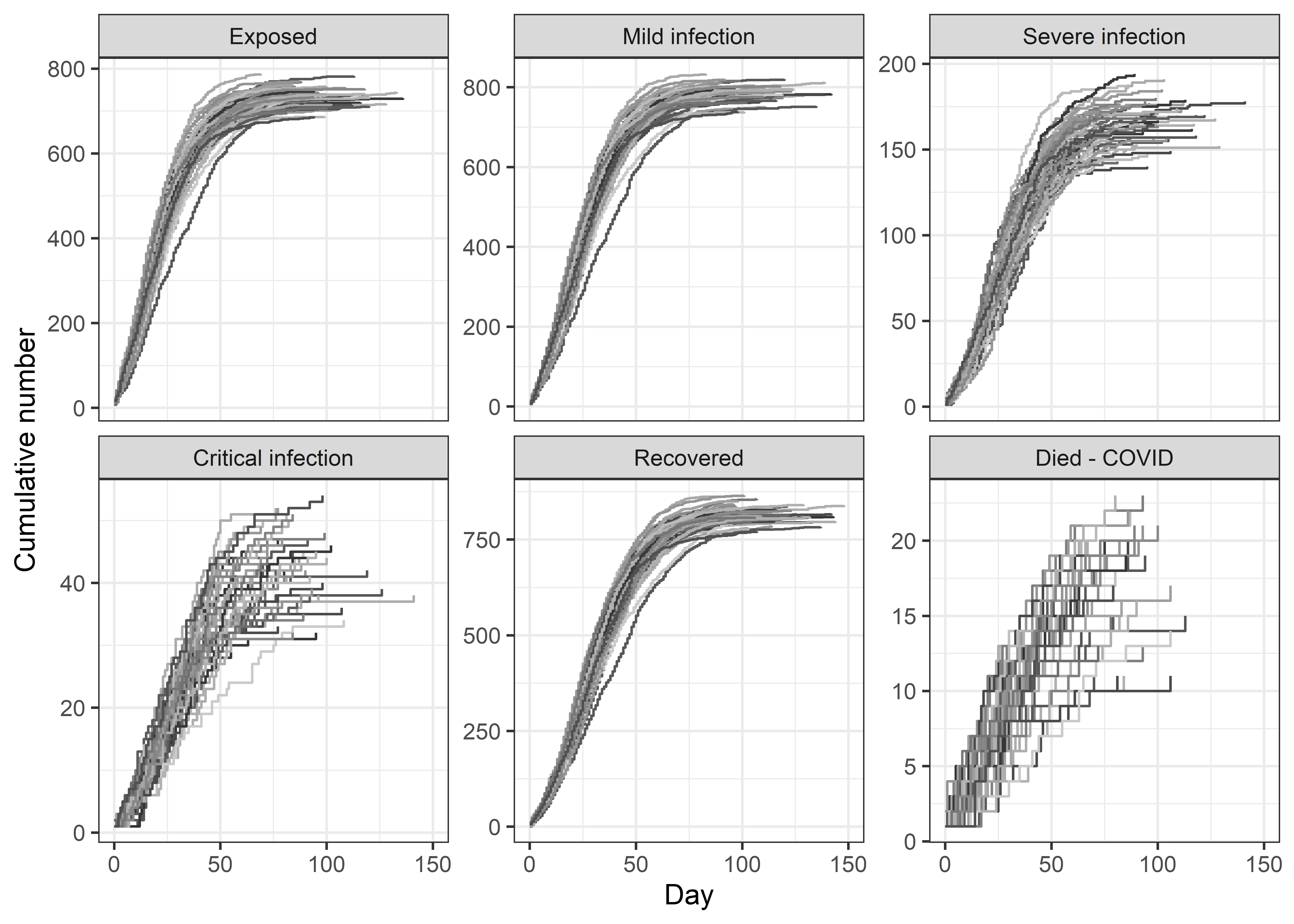 Below I plot the 50 versions of the number recovered from microsimulations (grey lines) with the number using ordinary differential equations (blue line). The ordinary differential equation model takes more time to get going, but then displays the similar S-shaped curve. The microsimulations start earlier because they need a decent number of infections to ‘seed’ the model, otherwise they can fizzle out. I assumed 1% of the population were “exposed” at day 0. The ODE model starts with just 1 “exposed”. 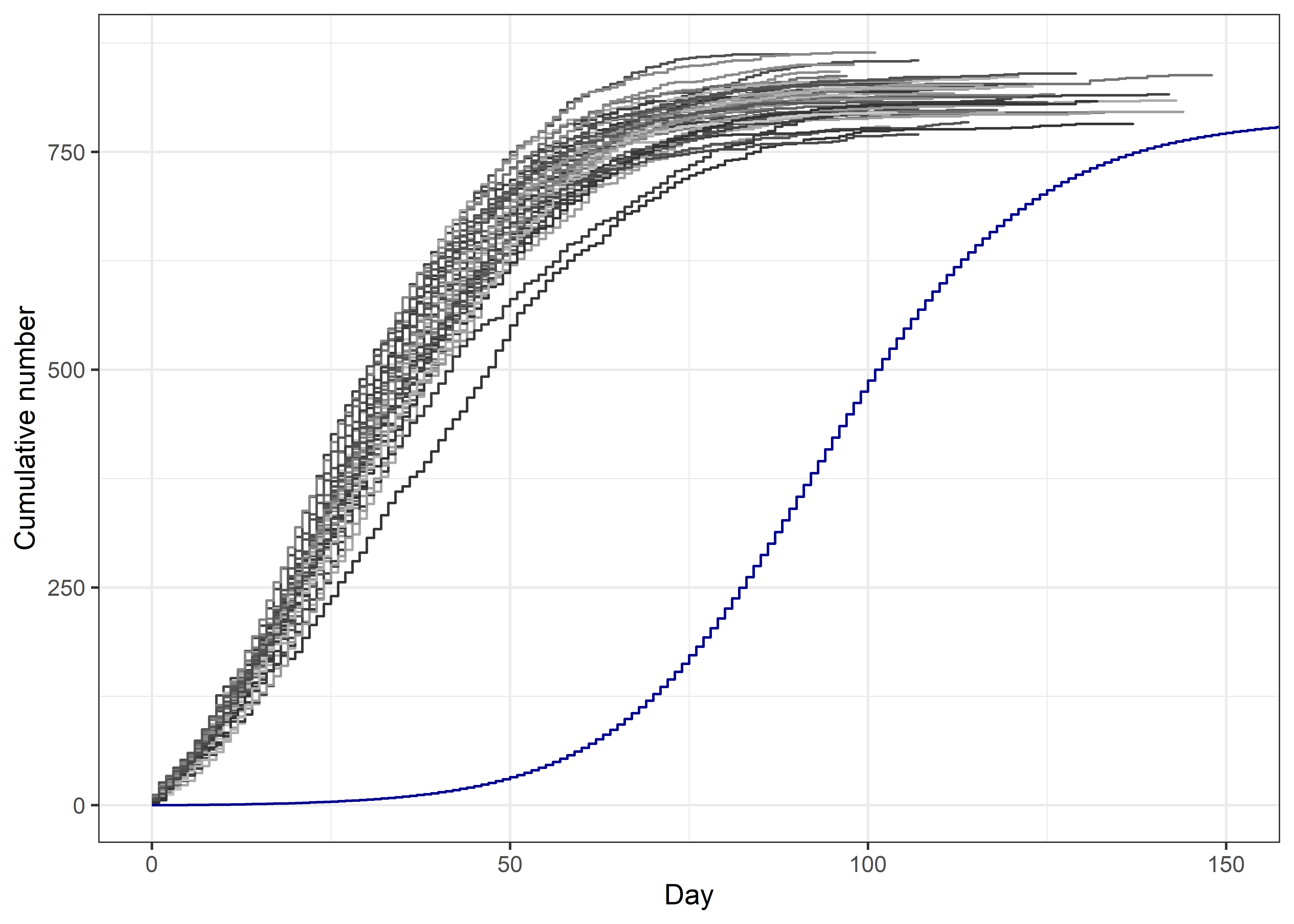 Numbers in each state

The table below summarises the number of events across the 50 simulations using the median count and 90% confidence interval. 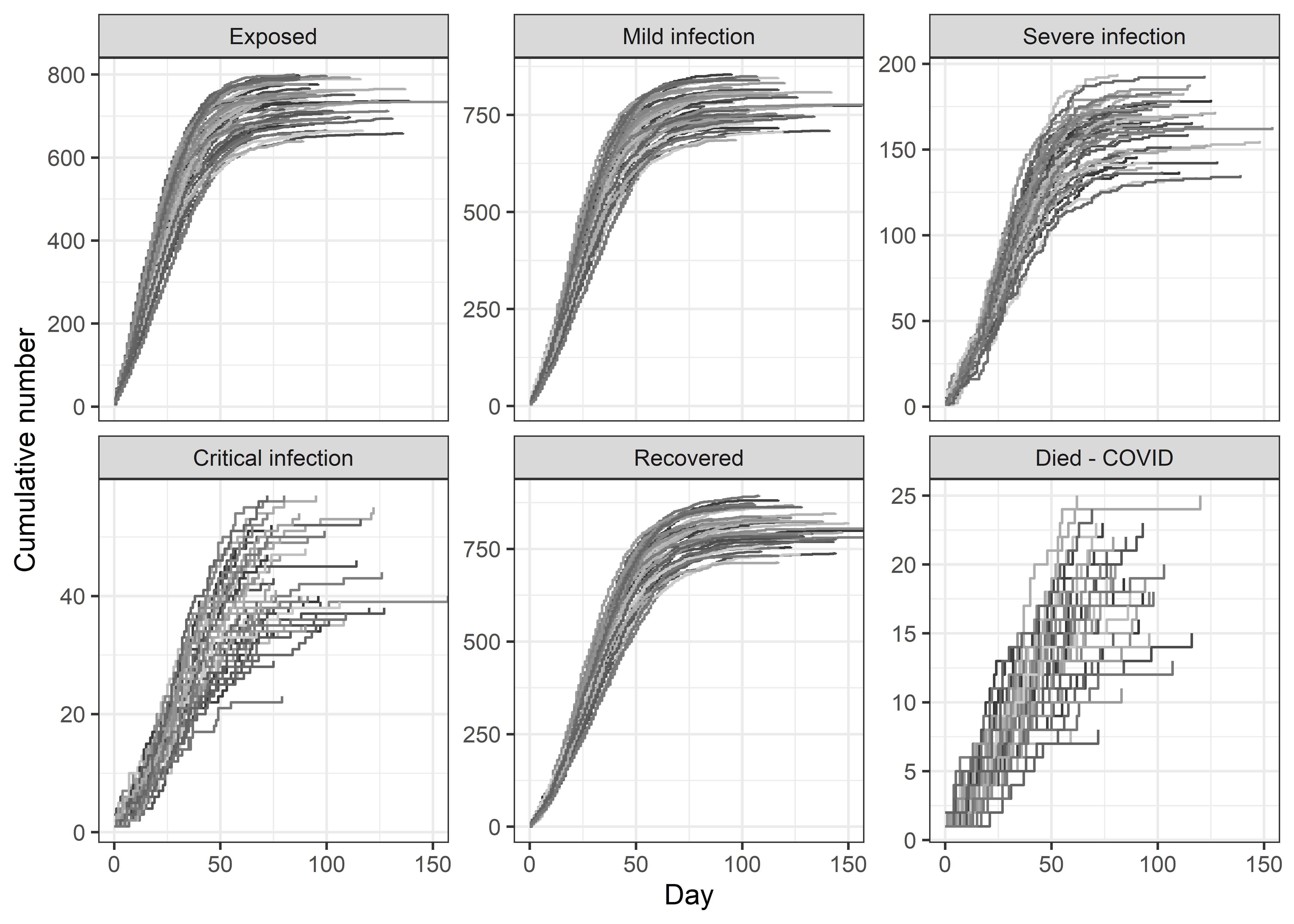 The table below shows the estimated numbers in each state, which now include stochastic and parameter uncertainty. Comparing with the previous table, we can see little difference in the median (as expected), but a relatively wide increase in the confidence interval.

Caveat: This work has been done relatively quickly whilst also trying to home-school.

I have updated the code to:

The box-plot below shows average ages for 50 simulations for transitions between the infected states and recovery or death. The model has created clear age gaps, as younger people are more likely to recover from mild infections and less likely to die when critical. 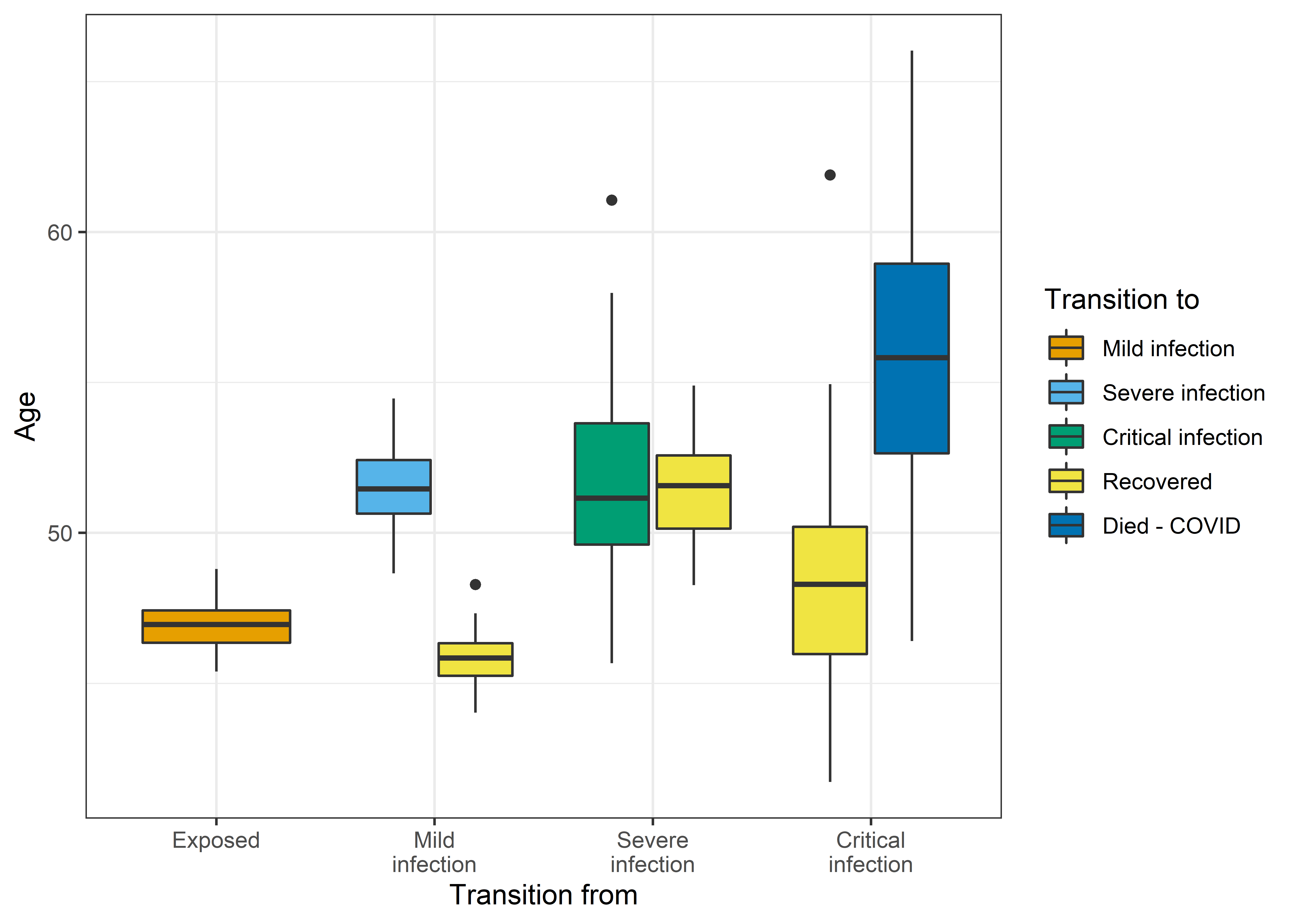 Acknowledgement: Computational resources and services used in this work were provided by the eResearch Office, Queensland University of Technology, Brisbane, Australia.